I had already dealt with one of the biggest killers of engagement in meetings and events – Powerpoint intoxication.

The main reason behind a lot of disengagement at meetings and events – and ditto with panels (image credit: Scott Adams)

Now is the time to kill another darling of the crowds (or rather: of event organisers): the panel discussion. 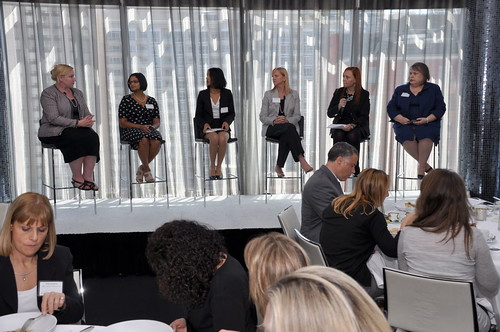 And I don’t mean ‘kill’ here in a definitive and burying kind of way, but rather in the sense of rejuvenating a real dinosaur of a practice, a la “the panel is dead, long live the panel”!

And as you might expect, I’m not the first one to look into this. Some eminent thinkers and facilitators (Duncan Green, Nancy White – is this a color show actually?) have been there before me and laid out the pathway. I would like to synthesise some of their offerings and offer a few ideas of my own in the mix.

And before I start, a couple of preamble comments:

A final thing to say is that ‘form follows function’ and replacing a panel with anything else is a decision pending on what the topic and outcome for that topic is. So the alternatives I’m suggesting below are not meant to replace classic panels everywhere all the time, they are just alternatives you might want to consider.

So here we go for a round of alternatives to the classic panel discussion: 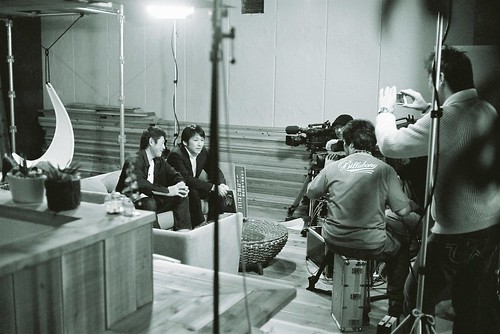 This alternative is basically a panel discussion in an informal setting, ideally with a lounge sofa, some background music (at the start and stop) etc. to give this a more relaxed and intimate feel.

The special magic of this format is that it feels so entirely different to the typical corporate stage of a panel discussion. That is an intriguing first bite, and it actually tends to make everyone also feel more at ease, which adds up to the informal atmosphere of sharing private stories etc.

The trap or caveat is in not paying enough attention to the atmosphere that makes up such a talk show. You really want to be adding music, sofa, nice decoration around, people dressed more casually perhaps, and ‘panelists’ (or ‘talk show guests’) that have a sense of humor to break the ice and add to the atmosphere.

At this stage I know at least 4 variations of this participation format but all focus on a central stage (what I usually call ‘the inner circle’) with a few people talking, and a periphery (the ‘outer circle’) at which all other participants are simply listening.

So here for the variations: 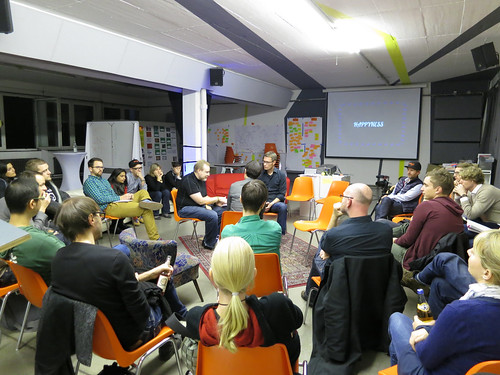 a) The classic fishbowl (described in the Knowledge Sharing Toolkit) usually consists of 3 to 6 seats of people in the inner circle that talk through the session without interaction. It can be really useful to use this when you want others to pay attention to some experiences.

b) The Samoan circle starts exactly like the previous variation, but this time people from the inner circle can free their seat up for those from the outer circle once they’re done saying their bits. And if no seat is freed, anyone from the outer circle can gently tap on the shoulder of any ‘talking fish’ in the inner circle to invite them to free their seat. That’s one of the variations I use most because it creates a safe space for many people to express themselves and to do so with ‘purpose’ after having listened to others, and it’s inviting a larger group of people to chip in.

c) The experience-based fishbowl resembles variation a) again. But this time it really is consciously about  inviting some ‘experts’ (people that have concrete experience with issue / process / procedure / tool / strategy xyz) to the central stage. They talk and share their experiences, and at some point the rest of the audience is invited to buzz and write down then forward one or more specific question(s) they have for the experts. This variation is great indeed to zoom in on what happens at the far technical end of a field and thus a great way to level knowledge.

Finally d) the facilitated fishbowl (favored by colleagues from Community At Work)  usually starts as a semi circle with the first row being the ‘inner (talking) circle’ of the other variations, and subsequent rows the ‘outer (silent) circle’. This is the only variation that has a facilitator in the inner circle to help paraphrase and clarify what the talking people in the middle really mean to say. This can be a very empowering and liberating participation format for groups that have different ‘factions’ that really have trouble engaging with and listening to each other.

The magic of all fishbowl formats is the emphasis on having a large portion of the participants to shut up and listen intently. If that principle is respected, it actually creates a conversation that is incredibly serene and slow-paced (in a positive way, as in ‘slow food’, ie.: quality conversations). The other bit of magic is the opportunity it provides to get certain people to be at the central stage in a non-threatening environment (yes, you’re hearing well, it’s also useful for introverts, and much more than that). And though you might think people won’t start talking in the inner circle, they never can resist doing so.

The trap or caveat is to choose your fishbowl variation for the right purpose and with the right people. Some variations (a, c) require people with real expertise. Un-facilitated variations don’t work well if people start asking general questions (to no one in particular) rather than conversing on a topic. Variation a) can feel pretty miserable if one of the people talks too much in a smaller group where no one challenges them… so think it through and be prepared to draw lessons for the future.

Chain reaction panel and other variations to the panel format

There are various interesting variations to a real ‘panel’ discussion:

Unruly classic panel: This is a panel without moderator. I’ve never tried this format, but could imagine it might sit between a panel and a talkshow on the spectrum of formal to informal ‘plenary group talks’. 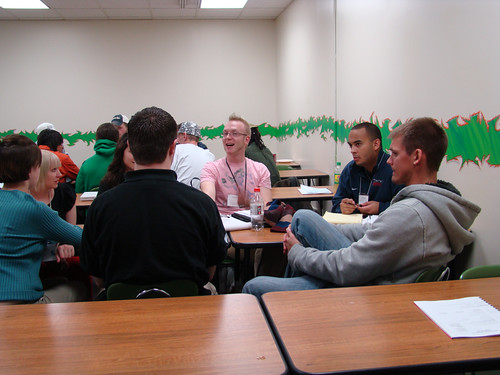 Roundtable: This is like the unruly classic but unfolds even more as an informal conversation as the roundtable set up gears people in the direction of a collegial exchange rather than a polite shoal of experts…

Debate / cross-fire: Here the idea is clearly to get people (or even groups of people) with different, or antagonistic views, to discuss a topic together. Because there is much more matter for controversy here, there is a special twist that makes this interesting, but it also puts more onus on the facilitator to do a good job at getting the group through this thinking process. One of the most famous types of such cross-fire formats is the Oxford debate. This kind of format also includes the Fishbowl battle that I blogged about in the past.

Chain reaction / panel: Finally, the chain reaction panel is a format where each panelist is asking another panelist some questions, so they all play a role of interviewer and interviewee. See this format at work here.

The magic and caveats of these different riffs on the panel discussion are different for each of them. The key is to create a fresh session for what looks like an outworn format.

The What if? conversation

This plenary group conversation starts with this question ‘What if? (abcd)’ rather than with answers given by panelists. I’ve never used this format and I was first introduced to it through this post by Nancy White. But in any case it sounds like an interesting alternative that again will create a different feeling simply from the fact that the ‘panelists’ are not going to perform what you expect them to. They will be exploring, and with a bit of ‘yes and’ magic they could really do wonders! The caveat, on the other hand is that you need to have a group that is ready to go out on a limb.

What if… none of this works for you? 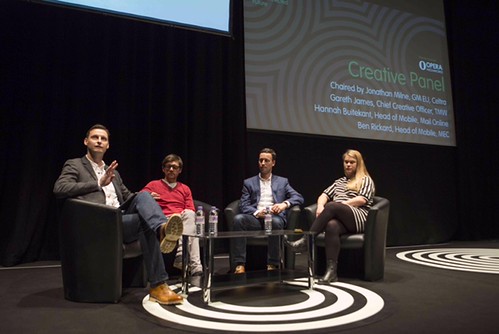 Ok so none of these alternatives is finding grace in your eyes? Shaken a bit too much out of your comfort zone? Fair enough! Every change journey starts with small steps. So you’re still going for a panel, but then at least pick some of the best advices about how to make panel discussion work here (whence I directly borrowed some of the formats presented in this post), here or here. Most of these posts emphasise the importance of controversy, getting the speakers to meet beforehand, and a punch facilitator/moderator that sets the tone of the panel.

Now, this is not even to mention an entirely new aspect of panel discussions and the likes: interactive engagement technology such as Slido, Mentimeter and more… AND there’s also plenty of other options in terms of how people might be presenting information. I sketched some in the presentation uploaded onto this post. And for your information miming, roleplay, theater skits etc. and other alternative storytelling modes can also be great ways to portray some important issues in a radically ‘different’ way.

So the solutions on offer are plenty…

This one I heard only last year: if your panel involves women, always ask the first question to one of them, as they are more likely to talk later than if you start with a man. Many men tend to monopolise the conversation. As Margaret Thatcher used to say (one of the few pieces of wisdom I credit her for):

And of course try and avoid ‘manels’ (all male panels) or ‘womanels’ if possible at all.

At the end of the day, all the advice above doesn’t really matter until you are clear about what you are trying to achieve for each of the topics you want to brush through.

But adding an element of surprise nearly always works in your favour.

One thought on “Shaking up the other plenary dinosaur: Panel discussions – redux”